Presentations: To Hell With The Corporate Template!

Presentations are a wonderful opportunity to showcase your services or persuade an audience. In the last 50 years or so the introduction of projected visuals into presentations added images and later colour to board and chalk. There is no doubt that enhancing the images available to our most powerful sense – sight, revolutionizes the impact of presentations dramatically. 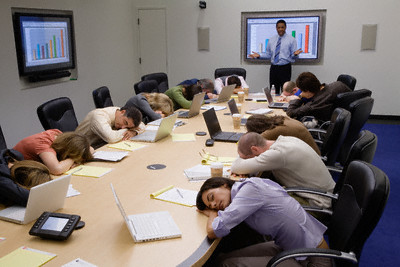 But when the trusty old, much maligned (unjustly so) overhead projector gradually gave way to dazzling PowerPoint in the nineties, a whole host of parasites accompanied it’s grand arrival. Audiences soon became burdened with slide overload, a proliferation of hideously small unreadable text and ghastly special effects. This can be likened to the European settlers arriving at the Cape in the late 1600’s with civilization, but bringing with it all manner of European viruses, diseases and expectations, upsetting the delicate co-existence of nature that existed at the time. But that’s not all. PowerPoint designers collectively grasped the business opportunity to create the abomination known as the “corporate template” which, once in place would stubbornly remain a fixture to plague, bore and annoy audiences far and wide. Much like an ugly family painting dominating the hallway and resisting all attempts at its removal. CEO’s have become so attached to their corporate templates that trying to convince them of their folly can be likened to trying to get an old lady to let go of her under-performing portfolio of dud shares. We get attached to things. Hence the company rule: All slides shows must be designed on the “corporate template”. The horror perpetuates. Lets take a look at the corporate template: It’s a bit like an outdated picture frame – ostentatious, busy and in your face. In pride of place it hosts the colourful and often loud corporate logo, which the hapless audience is forced to repeatedly endure through 76 transitions until eventually the school bell rings and the torturees are released to go and play. Corporate PowerPoint templates emerged with PowerPoint in the early nineties and lost the lustre around 1998 – long before the decade was out. That was the same year that interest rates briefly reached record highs before subsiding back to respectability. Regrettably, the corporate template did not suffer a similar fate but has remained entrenched in the corporate culture. Here’s the rub. It’s perfectly acceptable to display your company logo on the first slide (“You had me at hello”) and perhaps at the end. Any more than that amounts to clutter, and frankly looks like visual pollution. In order to have maximum impact each slide should be like a subtle piece of art – attractive, uncluttered and holding a clear message. Your logo, when overexposed, represents a side act and a distraction. Slide show presentations have entered a new era – more photo, the occasional graph or map, less slides, a minimum of text and sometimes no headings at all. One thing is for sure, if you persist with the outdated corporate template, expect the yawning to commence around slide 2 followed by loud snores. Do you want your visuals to keep the interest of your audience or to tune them out. Are you trapped in the past or focused on the future? Perhaps it’s time to dump that corporate template in favour of a fresh new look that will ensure you get the compliments – and the business.

Present With Confidence is a product of Congruence Training (Pty) Ltd. Call our offices or email us for training, information or coaching to improve your presentation skills. The information you share with us is protected in accordance with POPIA. Please see our Privacy Statement.

Enquiring about our in-house training courses? Please click on this button: